What is GPS Car Tracking?

The GPS (Global positioning system) is a network of satellites which orbit the Earth continuously, sending out signals to receivers on the ground. GPS technology is used on a daily basis, for satellite navigation, commercial tracking, military purposes and even the monitoring of vulnerable people, such as the elderly.

How does GPS Car Tracking work? 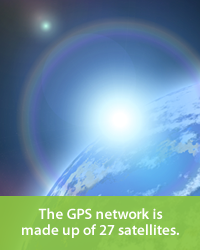 Designed in the 1970s, and set up and maintained by the US department of defence (DOD) the GPS network is made up of 27 satellites - 24 active and 3 spare. Its purpose was to provide navigation information to people on Earth irrespective of local conditions. Any device on Earth capable of sending or receiving GPS signals is capable of receiving time and location information from the GPS network - as long as it is within 'sight' of at least four satellites in the network. The satellites send out a constant stream of data including the time that piece of data was sent, and the satellites' location at that time. The GPS device then uses triangulation to work out its position relative to those satellites. Take two or more calculations of position, and most modern GPS units (think of an in-car satellite navigation system) can work out speed and movement from those endless calculations.

The applications of GPS are many - commercial, military and civilian. However, one of the areas in which GPS has really made an impact is in the field of security. Especially now that a GPS device is little more than a chip which can be tucked away into the smallest of mobile phones; it is a technology which offers great scope for anti theft devices on phones, computers, and even cars. Where previously it was possible to change license plates, even spray paint a car and change its general appearance, it is much harder to hide from a GPS tracker.

Locate your car with pinpoint accuracy 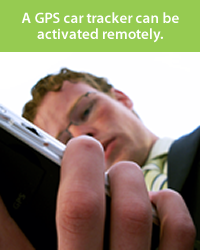 A GPS car tracker can be activated remotely whenever it is required. Should your car be stolen, one simple phone call can activate the tracker and the location of the car with almost pinpoint accuracy. Some car tracking systems can be set to activate when your vehicle leaves a certain area (also known as geofencing), and can be set up to work in tandem with other vehicle systems - setting off the alarm, activating door locks, and even overriding ignitions! Such a system can even lower the cost of car insurance, so effective have such GPS tracking units been proven.