Vehicle owners living or working in the City of London look away now!

Exclusive research found areas in the UK with the highest car thefts in relation to population in that area, and it doesn’t make good reading for those in the capital of England. By contrast those in Devon and Cornwall will sleep well knowing their vehicles are pretty safe, according to the statistics anyway!

The study cross-referenced data provided by 42 Police forces from all over the UK with local population figures. The research found:

A quick glance at the results and you’ll soon realise statistically speaking the UK’s car crime hotspots are more densely populated, urban areas, whereas those in rural areas are less likely to suffer the stress and heartache of having their most prized possession stolen.

So if you live in the city make sure you have your wits about you, car thieves 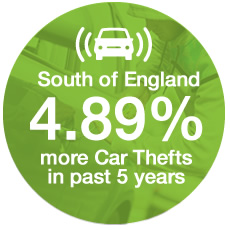 Who Said It's Grim Up North?

In recent years the North South divide has caused quite a stir due to various social and economic differences, but those in the North will be glad to know the South of England had 4.89% more car thefts per person in the past 5 years compared to the north of the country, see who said it’s grim up North?

But don’t worry guys, it’s not all bad news!

The study also revealed car theft is on a continual decline throughout the UK, partly down to advances in technology, especially car tracking devices like those sold here at Tracker Fit.

Read Six ways to protect your car from theft for further information on reducing the risk of car thieves targeting your car.

Posted in News By admin